We have been following the government’s reforms to the taxi and hire car industry, with great interest, including the introduction of the Knowledge Test, new taxi zones, changes to the availability of taxi licences from July 1, 2014, and the on-line price notification system.

It is great to see that the information about these initiatives is now available to the wider community, through the TSC  website, and by signing  up to receive Taxi eNews. The TSC’s commitment to better communication is helpful not just for those working in the industry but also those who are the users of taxis in Victoria.

We note that the Knowledge Test is to be delivered by Genix as contractor, and the Knowledge Test includes a module on driver behaviour.  We hope that future versions of the sample questions in the driver behaviour section will make reference to the need for Respectful Behaviour towards women! And it is concern that as yet drivers in regional and country taxi zones and the country hire car zone are not required to pass the Knowledge test.
Posted by NCWV at 09:00 No comments:


The NCWA Mid -Term Conference, held at the Chifley Resort, Alice Springs, Northern Territory, from 27th May,  to the Dawn Service on Anzac Hill on Friday 30th a.m., was a great success. 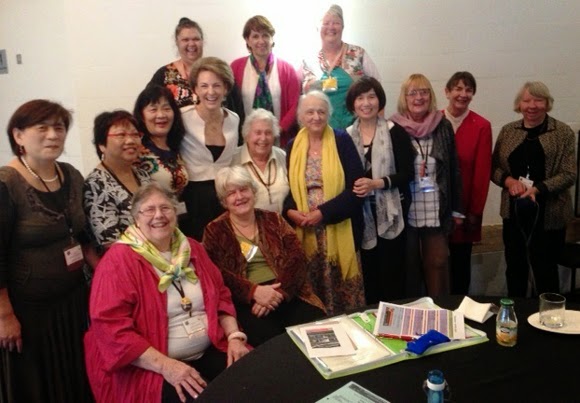 Some of the outstanding speakers were Dr Patricia Miller AO, Deputy Administrator of the Northern Territory who welcomed delegates  to Alice Springs; Local member, The Honourable Bess Nungarrayi  Price, NT Minister for Women’s Policy, Community Services, Statehood, Parks and Wildlife; Former NT Senator Trish Crossin; Jan Turner from Reconciliation Australia who spoke about the process and options  for the forth coming referendum  on recognition of Aboriginal and Toees Strait Islanders in the Constitution; Three Board members from NATSIWA the Aboriginal and Torres Strait Islander Alliance and Senator the Honorable Michaelia Cash, Minister assisting the Prime Minister for Women who read a message to the conference from the Prime Minister.

Resolutions: Five resolutions were adopted including the one presented by NCW Victoria on Forced, servile/early, underage marriage which was carried unanimously.

My Vote, My Voice

On Thursday 20th March 2014, National Council of Women of Victoria hosted an excellent International Women’s Day event in the Legislative Chamber of the Parliament of Victoria.

After refreshments and photos of participants and attendees in Queen's Hall, we went into the ornate Legislative Chamber and were welcomed by the President of National Council of Victoria, Mrs Sheila Byard, who introduced the panel and the speakers. 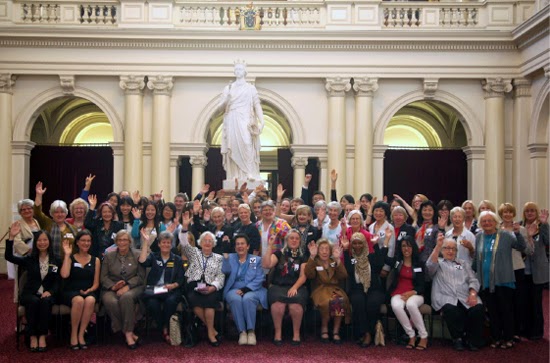 This year is the 100th anniversary of women being able to stand for local government office and the 90th Anniversary of the date when women were first able to stand as candidates for the Parliament of Victoria. Female Members form only 33% of the Legislative Assembly even today. It was not until 1979, that Victoria's first female Legislative Councillors were elected one of whom Gracia Baylor AM, former Member for Boronia Province was able to be with us on the day. Among the other guests was Mrs Beryle Foster (the former Councillor Beryle Campbell) who was the first woman elected to Swan Hill Council in 1959.


National Council of Women of Victoria acknowledges the support of our partners in its 2014 International Women’s Day event ‘My Vote My Voice’ including the Presiding Officers and staff the Parliament of Victoria, especially the Hon Bruce Atkinson MP, President of the Legislative Council and his staff, the Victorian Electoral Commission, the Bessie Rischbieth Memorial Trust of the League of Women Voters of Victoria, The Hon. Jeanette Powell MP, Minister for Local Government, The Australian Women’s Local Government Association (Victoria), Sophie Nowicka Photographer and the YoungNCWVic team (Gauri K., Olivia S., Pyrrha P-B and Yvette W.)

youngNCWVIC is on the Way!

Strategic planning advice obtained by NCWV from Deakin University and the pink paper exercise from early 2013 confirmed the urgent need for National Council of Women of Victoria to bridge the generation gap by embracing the new social media and to find ways of involving younger women in its work.

In order to create a framework to engage younger women, we looked for an opportunity to have some young women to take on a task that could be successfully accomplished within a given time frame.

The idea is to get the under 30s to facilitate the involvement of the secondary students in the NCWV project ‘My Vote, My Voice’ linked to the Victorian Electoral Commission Passport to Democracy program. We have had a careful look at the arrangements adopted by NCW Great Britain but have decided not to adopt their system of signing young women up directly and charging a fee of 15 Euros. Rather we have been trying to involve younger women through one or another of our affiliate or partner organisations working under the supervision of an experienced NCWV member.

Thanks to some great work by the younger women with whom we already have contact, we now have a social media set up for youngNCWVIC. This will help their work with us on projects like the Year 9 students event at the Parliament of Victoria on March 20th.

The Gmail address is youngncwvic@gmail.com and a blog has been created at the youngncwvic Wordpress page linked with with Facebook, Twitter, Tumblr and Hootsuite links. Tumblr is a way of enabling students to post photographs of themselves working on the presentations they will bring to the Parliament on Thursday March 20th and thus helps build momentum for engagement in the project, as well as act as a base set of information about the progress of the project.
Posted by NCWV at 15:49 No comments:

Trailblazing Women and the Law research project leader, Professor Kim Rubenstein, was the invited speaker for the National Council of Women of Victoria 53rd Australia Day ceremony on January 23rd, 2014. Speaking in the Pioneer Women’s Gardens, in the Melbourne’s Domain, Professor Rubenstein said that NCWV


… has always been intimately concerned with issues about women and the law. In Ada Norris’s excellent book we hear “In 1905 our first woman lawyer had awakened Council members to legal inequalities affecting women. Subsequently, particular aspects of this subject came before the Council. The demand for legal equality with men has grown ever since as more and more women have realized that many things they had taken for granted and considered inevitable and even right and proper were indeed unjust and discriminatory”.

Professor Rubenstein also gave the audience an update on the Trailblazing Women and the Law project and what has been achieved since the project began in 2013. Her address can be read in full at the site for the joint ANU/University of Melbourne research project with a short introduction by Dr Nikki Henningham on Tuesday, January 28th, 2014.