May Forum 2020: Gender Equity in Workplaces

The National Council of Women of Victoria’s May Forum was cancelled due to COVID-19. The focus “Gender Equity in Workplaces”, instead became the topic for our May ZOOM Council Meeting.

One of the proposed forum panel members, Professor Beth Gaze spoke at this meeting. Beth teaches Equality and Discrimination Law and Administrative Law at Melbourne Uni Law School. Her research interests are in anti-discrimination and equality law, feminist legal thought, administrative law and socio-legal research. She has conducted research into the enforcement process under Australian anti-discrimination law, experiences of applicants in the social security appeal tribunals, and the operation of adverse action provisions of the Fair Work Act. Beth spoke about the new Victorian Government Gender Equality Act 2020.

The Act seeks to promote and improve gender equality across the Victorian public sector, local councils and universities. It involves innovative powers and processes that have not previously been used in Australian law. It will commence on 31st March 2021. The government is working on developing the framework for its implementation, driven by the Minister for Women, the Hon Gabrielle Williams, with input from the public including a Citizen’s Jury. It aims to take necessary and proportionate action towards achieving gender equality in policies and programs and delivering public services. Organisations need to undertake workplace gender audits, to assess gender equality and inequality in the workplace. These must be based on gender-disaggregated data and, if available, data about Aboriginality, age, disability, race, ethnicity, gender identity, religion and sexual orientation. They need to develop and implement Gender Equality Action Plans in 2021, updated every four years, with Progress shown every two years against gender equality indicators. The Minister is also required to develop a State Gender Equality Action Plan every four years that will set a framework for taking coordinated action in Victoria to build behavioural, attitudinal, structural and normative change to improve gender equality, including a framework for progress on workplace gender equality, programs and services. The Office for Women is developing guidance documents to support organisations in doing the audit, action plan, assessment and progress reporting. The Act also provides for creating gender targets or quotas requiring these to be taken into account in gender audits with ‘reasonable and material progress’ to be made towards targets and quotas, a first in Australian equality law. 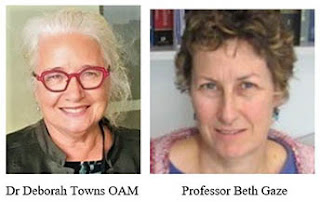 Dr Deborah Towns OAM then spoke on other Gender Equity issues. The private sector is covered nationally by the Workplace Gender Equality Act 2012. Commonwealth Government in 1984 introduced the Sex Discrimination Act. Other legislation at State and Federal level have passed, with Human Rights Commissioner and officer appointments.

Progress towards equal pay has a longer history. In 1903 equal pay for equal work was on the agenda at NCWV’s Congress. The industrial relations system endorsed this in 1969. However, there is still a gender wage gap today, with overall gender pay gap of 13.9% in Australia for full-time workers. When broken down into sectors it gets interesting, e.g., in finance and insurance where 1000s of women work the pay gap is 22%, also in professional, scientific and technical work; and 22.3% in health care and social services. In education and public administration (70% are women) the pay gap is 12%. Many women work in caring, cleaning, catering and retail, often not full-time, poorly paid, with little opportunity to adequately support themselves, or their families if they are sole parents, and save for their retirement through superannuation and in other ways.


The Male Champions of Change was established in 2010 to lead action on gender equality in workplaces, now with over 200 leaders of business, government, universities and military representing many different workplaces across Australia. They publish annual reports on progress and guidelines on how workplaces can change gender pay gap. Despite this there has been little to no change.

On behalf of the National Council of Women of Victoria (NCWV), I applaud Federal Government for calling for a much needed inquiry into Aged Care. I also thank the National Council of Women of Australia for encouraging Constituent Councils, such as NCWV to make submissions in their own name direct to the Royal Commission. NCWV is an NGO representing some 30 like-minded NGOs and a similar number of Individual members whose purposes are to:


With these purposes in mind, NCWV is alarmed at the abuse that many elderly citizens receive whether it be in residential care or living at home, therefore is pleased to be able to make comment on the care of the elderly. Three points that form the basis of good care negating abuse and discrimination of the elderly are:
Click here to read the full submission.
Posted by NCWV at 12:56 No comments:

On behalf of the National Council of Women of Victoria (NCWV), I applaud the Andrews’ Government calling for a Royal Commission to report on the state of Mental Health within the State of Victoria. I thank the Commission for giving NCWV the opportunity to make a submission at this late date. NCWV is an NGO representing some 30 like-minded NGOs and a similar number of Individual members whose purposes are to:


With these purposes in mind, NCWV acknowledges good mental health is essential for good general wellbeing of the community. It is concerned about the general well-being of people, particularly women and girls; It was not until 2011 that the importance of good mental health was fully recognised globally and firmly placed on the agenda of the United Nations and its agencies. An ICW-CIF Representative to the UN was one of those advocating for such recognition. It is pleasing to see the importance of mental health being recognised, but sadly the general care of those suffering from mental illness requires review and the need for the stigma to be removed. This came through in an MSO film clip/documentary, “A dangerous son”, made in the US by producer Liz Garbus for Firecracker, shown by QANTAS in September 2019. With a grandson on the Autism spectrum I, the author of this submission could relate to much of the documentary.

Click here to read the full submission.
Posted by NCWV at 12:50 No comments: