The 120th anniversary of women's suffrage in Australia

While the Bill had aimed to extend the franchise to Aboriginal and Torres Strait Islander peoples and to those who were then referred to as ‘coloured people’ from overseas, it was amended to exclude ‘aboriginal natives of Australia, Asia, Africa or the Islands of the Pacific’ from being placed on the electoral roll, unless entitled under Section 41 of the Constitution. It would be another 60 years before all Aboriginal and Torres Strait Islander peoples were able to enrol and vote at federal elections, following the 1962 amendment of the Commonwealth Electoral Act 1918.

The first federal election at which women in Australia were able to exercise their rights to vote and to stand as candidates was held on 16 December 1903. Four women contested that election: Selina Anderson (later Siggins), who ran for the House of Representatives in NSW; and Senate candidates Vida Goldstein in Victoria (for whom the electoral division of Goldstein is named), and Nellie Martel and Mary Moore-Bentley (later Ling) in NSW. They were the first women nominated for election to any national parliament in what was then the British Empire. All four women ran as independent candidates. None were elected.

Selina Anderson, the first woman to run for the Australian House of Representatives, had originally intended to run for the Senate. In 1904, she sued a shopkeeper for defamation, claiming that remarks he had made about her had prevented her from standing for the Senate describing her as a woman of 'libidinous and licentious nature and disposition'. Her case was unsuccessful. This may sound familiar in the wake of recent revelations about the treatment of women in politics, including those detailed in the Australian Human Rights Commission’s 2021 report Set the Standard.

My Vote My Voice: The Role of Treaty in achieving Reconciliation, 2022

An early announcement about the National Council of Women of Victoria annual student event My Vote My Voice to be held in the Legislative Council Chamber, Parliament of Victoria on the morning of Monday 22nd August 2022, 9:15-12:30pm.

This year’s theme is My Vote My Voice: The Role of Treaty in achieving Reconciliation.

This is designed to encourage students to investigate the issues around reconciliation and the opinions of indigenous people, their peers and others in ways to achieve reconciliation. Students may carry out research, and collect data from surveys, Students are invited to make a group presentation of their findings in the Legislative Council Chamber on 22nd August.

Reconciliation Week, May 27-June 3, with a theme of “Be Brave. Make Change.” is an opportunity to start this research. Please alert teachers, students and schools to the event.

This once again celebrated Victorian Pioneer Women, conducted annually by the NCWV to acknowledge past and present women pioneers, this year at the Pioneer Women’s Memorial Garden, Kings Domain in beautiful sunshine. As 2022 is the 120th Anniversary of NCWV, the focus was on pioneer women who established Victorian women’s organisations and who have continued these organisations up until today. Dr Judith Smart AM, co-author of the history of the NCW Australia, Respectable Radicals gave an overview of the history of women’s organisations and the Great Granddaughter of Janet Lady Clarke, Barbary Clarke, also spoke.


Dr Deborah Towns OAM introduced Dr Judith Smart AM, and began by recognising 2022 as a significant year not only for NCWV, but for all Australian (white) women who won the right to vote and stand for election in 1902. Victorian women had to wait until 1908 to vote in state elections and stand in 1924. Vida Goldstein, an early NCWV member was one of the suffragists who campaigned tirelessly, then unsuccessfully stood many times as an independent candidate. Judith is an Adjunct Professor at RMIT, an academic who has inspired and supported me and many others. She has many publications and continues to write books and articles. Of importance to us today is that Judith co-authored with Dr Marian Quartly, Respectable Radicals: A History of the National Council of Women of Australia, 1896-2006. NCWV stories are in there too, but Judith has prepared her talk with new material about NCW Victoria and what we have got up to since 1902.
Judith Smart AM highlighted the amazing women and their activism in the past. Thousands of women all over Victoria are working for women in so many areas that we continue to try and improve today. Equal pay for one. Domestic violence; Safety in workplaces; Homelessness; Health; Childcare and more. She brought all this work to the forefront of Victoria’s history. We have so many women to thank from the past.
>> Her speech

Barbary Clarke, Great granddaughter of Janet Lady Clarke
Barbary spoke of her ancestor’s women-centred activism. On reading her biography, I was astounded at what her Great grandmother accomplished, including founding with Vida Goldstein and others NCWV, welfare of community and advancement of women, also inspiring others. Barbary spoke of her Grandmother Ivy’s parents, Pattie and Alfred‘s passion for equality of women and men along with her husband Herbert Brookes and Ivy’s activism with NCWV for 50 years. She was on the NCWV Executive from 1912, President in 1938 when she represented Australia at the 50th Anniversary conference of the International Council of Women in Edinburgh. She was NCWA President 1948-1952 and was appointed life vice president. This was a productive time for NCWV,… active on marriage legislation, equal pay and migration policy – and the election of women senators from amongst its own ranks. Collaborating with Elizabeth Couchman in 1944, Ivy brought the Australian Women's National League into Menzies’ new Liberal Party of Australia – but only after equal representation of women and men on all committees was guaranteed. In 1937 Ivy represented Australia at the League of Nations Assembly in Geneva, the only woman in the Australian delegation, later becoming Vice-president of the United Nations Association of Victoria for 18 years. She was also the first Chairwoman of its Status of Women Committee. See rest of her speech in the April Newsletter.

Mannie Kaur Verma, Director YWCA Victoria, spoke as part of the panel representing four of the founding organisations of NCWV who met on 19 March 1902. She spoke with passion about the rich history of YWCA, the Victorian arm founded in Melbourne in 1882 by Sarah Crisp Booth. Mannie emphasised the strong bond between YWCA and NCWV 120 years ago and still there today with the commitment to gender equality unwavering. She stressed that such organisations who have stood the test of time have done so on the shoulders of remarkable women who paved the way. And while across YWCA’s 140-year history many things have changed, the intention to support all women to aim high and live a noble life has not. Indeed, for both organisations, a desire to best serve the women and girls of Victoria and Australia remains. That desire driven by the remarkable women of these organisations has helped reduce the gender pay gap, delivered family law reform and improved support for survivors of domestic, family and sexual violence. These are just a few of the ways the NCWV has also made a significant contribution to making gender equality a reality, which YWCA has been proud to support as an affiliate. However, she emphasised that work is not over. Mannie, as a lawyer who specialises in domestic violence, sees how far too many women and girls struggle to access the support they need, navigate the complex legal system and find the resources they need to rebuild their lives. The fight for gender equality and to ensure all women and girls can live that noble life is not done.
Beverley Kannegiesser, The Austral Salon Melbourne and NCWV Committee member (above), spoke about the rich history of The Austral Salon of Music founded in 1890 by a group of strong and talented women journalists who based the Austral Salon on similar overseas clubs. She explained that the Austral Salon was to be a meeting place for professional women to discuss current issues, be a platform for informative speakers, for dramatic and musical entertainment. The members were heavily involved in the rights of women and social welfare. They encouraged and financially supported young artists, mainly singers and was also a generous philanthropic group. One of the earliest acts was to send Tilly Aston, a blind girl, to university. Tilly became a leader and a wonderful contributor to society. She is remembered by the federal seat of Aston and the three bells memorial located on the way to the Pioneer Women’s Garden. Beverley spoke of Agnes Murphy, one of the founding journalists, a trail blazer as a journalist, author, radical suffragist, political activist, and as a gifted speaker. Newspapers at the time facetiously described her as ‘pen lady in chief to Melbourne society’, and ‘high priestess of the Austral Salon’. At an Austral Salon meeting in 1891, Agnes gave a lecture titled ‘Letters and Letter Writing’, … referencing an affectionate letter from Napoleon to Josephine; a brutal one from Lord Byron to Lady Caroline Lamb, and an amusing letter by an Irish leader in the rebellion of 1798. In the discussion that followed, it was suggested that telegrams had killed private letter writing, what would they have thought of our present-day emails or worse our tweets. See rest of Beverley’s talk in the April Newsletter. 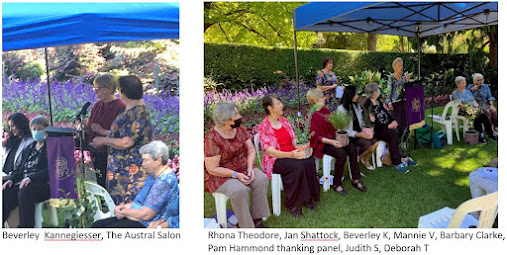 Jan Shattock, Executive member of the Woman’s Christian Temperance Union of Victoria (WCTU), spoke about the purpose of the WCTU from its origin in 1897, set out in its motto – “For God, Home and Humanity”. This was updated in the 1990s to “To promote a Drug-Free Lifestyle and Christian Values in the Home and Community.” Throughout its long history, WCTU has worked and written letters to Members of Parliament and other relevant authorities about issues with which it is concerned, particularly regarding alcohol policy, moral issues and the welfare of women and children, especially regarding family violence. Submissions have been made to ANZFA and others regarding the need for warning labels on alcoholic drinks concerning the dangers of drinking alcohol while pregnant. A highlight at this time was the hosting of the WCTU World Convention in 1995 held at the Townhouse Hotel. Jan spoke enthusiastically about the Drug Education in Schools, developed in the 1970s and 80s. … By 2010, there were two … with about 1000 Grades 5/6 and Years 7/8 students annually in State and Christian Schools (country and city) receiving greatly appreciated presentations …
“Take note, babies and booze don’t mix. No alcohol is the best fix.” Thousands of these sticky note pads were distributed to doctors, Infant Welfare Centres, and anywhere else members went. In 2018 and 2018 advertisements about FASD on buses, …with a no alcohol symbol and message, “For baby’s sake THINK – DON’T DRINK especially if pregnant or hoping to be pregnant.” See rest of Jan’s talk in the April Newsletter.
Posted by NCWV at 15:47 No comments: