Beryle Frances Campbell Foster OAM was awarded a medal in the Order of Australia Medal in the General Division, 2018: “For services to women in Victoria”. Beryle has been a long time active member of NCWV since joining in 1967 NCWV Murray Valley (Swan Hill) Branch. She became the first woman to be elected a Councillor for the City of Swan Hill. Beryle and members of the Murray Valley Branch actively supported the formation of NCWV Sunraysia (Mildura) Branch in 1969, closing in 1975.


In 1986 Beryle joined NCWV as an Associate Member regularly attending bi-monthly meetings and holding many Associate roles. Whilst on NCWV Executive Beryle was a member of the Finance subcommittee (1993) and Functions/Fundraising subcommittee (1993). Her active interest in NCWV has not wavered. When NCWV was invited in 1993 to re-establish the Swan Hill Branch, Beryle along with NCWV member the late Alice Teague accompanied the then NCWV President Janet Galley OAM to Swan Hill to reactivate the Branch. It was wonderful to walk along Campbell Street in Swan Hill and see both Beryle and Alice being greeted by people who they had known when both lived in the district. At the Swan Hill City Council Civic Reception that evening Beryl and Alice knew most guests and the admiration and respect for them was evidence that their time in Swan Hill had been valued and appreciated. Beryle saw service in WW2. She is a member of the League of Women Voters and the Penguin Club. 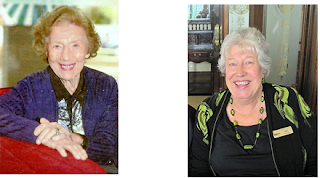 Janice Ann Kinloch OAM was awarded a medal in the Order of Australia Medal in the General Division, 2018 "For service to women and to the Community of Geelong". Jan's voluntary service is extensive, encompassing Scouting, St. John of God Hospital Auxiliary, The Order of St. of Jerusalem Knights Hospitaller Australia, and the National Council of Women Australia, Victoria and Geelong Branch.

During 30 years of scouting service, Jan has been recognised with the Medal of Merit, World Badge and Outstanding Service Awards. She is still a member and treasurer of the Geelong Scout Heritage and Archive Centre Team. Jan has been a member of St. John of God Hospital Auxiliary since 1989 and President for 20 years, supervising fund raising and the setting up of a staffed Hospital Gift Shop. Jan drives Oncology patients to and from their homes in the Greater Geelong region weekly.  Jan has been a member of The Order of St. John of Jerusalem Knights Hospitaller since 2007 and has recently been made a Dame of Grace for her philanthropy.